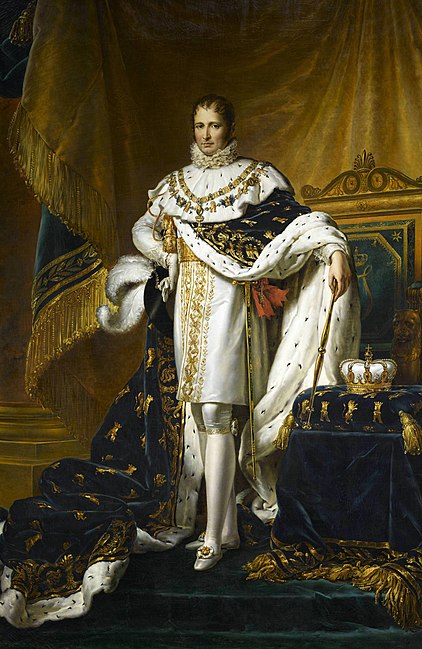 Joseph Bonaparte was born Giuseppe Buonaparte in 1768 at Corte in Corsica, and was the older brother of Napoleon Bonaparte. He became a lawyer, a politician, and a diplomat and served in the Cinq-Cents as well as being the French ambassador to Rome. He also had a very different temperament then his brother.

In 1795 Joseph was a member of the Council of Ancients where he used his position to help his brother overthrow the Directory.

Around 1806 Bonaparte made him king of Naples, but the reign was short-lived because in 1808 he was offered the throne of Spain by Napoleon. Spain revolted against the French rule and his rule of Spain was never complete, nor did he receive legitimacy with the Spanish people, despite his bloodline and connections. But he did help to end the Spanish Inquisition.

Bonaparte finally abdicated his throne and in 1816 was banished from France. He lived in first New York City and then Philadelphia, PA, where his house was a frequented by many French expatriates.

He later moved to and had built an estate in Bordentown, New Jersey. While hunting one day he purportedly saw the "Jersey Devil" - a mythical local beast.

Bonaparte's home was built on a hill and had a number of tunnels, both of which because he feared attack by France's enemies, or by unfriendly's from England or Spain or the US. But he did entertain many hosts of note. Bonaparte's House in Natural bridge
In 1818 Joseph Bonaparte visited Watertown (need more verification of this, could be incorrect). In 1820 Joseph Bonaparte bought a large tract of land in Natural Bridge and built a large framed house for his summer residence, and on one or two summers he made a short stay there.

Around this period he gave a section of land to his nephew, Prince Napoleon François Lucien Charles Murat, the son of Napoleon’s brilliant cavalry officer Joachim Murat. The tract of land was between Evans Mills and Theresa, and he decided to build a city named after his father, Joachim. The endeavor was a failure. An inn, a store, a grist mill, and a bridge across the Indian River deteriorated was fell into ruin. Some still know this as Joachim, a "lost village". The Hermitage at Lake Bonaparte
Around 1829 Joseph Bonaparte visited land in NY which he had bought from Chaumont (James D Leray). He built a road from the old turnpike to the lake which now holds his name - Lake Bonaparte. Remnants of the road can still be seen where they put logs on top of each other for Joseph's coach to pass. He also built a home (called the Hermitage - not to be confused with Madame de Feriet's Hermitage - a 'Hermitage' is a secluded residence or retreat) at Natural Bridge and in the Town of Diana near Alpina on what he called Lake Diana (Lake Bonaparte). But the log lodge at Lake Bonaparte was destroyed by fire during this time period. Sometime in 1839 when Joseph Bonaparte took a trip back to England, he provided a home for his American 'wife' (Annette Savage who later married Joseph de la Foille and after he died she married Harry Horr, at which point they moved to New York City) and daughter by building a home on a bend of the Indian River between Evans Mills and Philadelphia. Later Julie, a daughter by this marriage, married a local.

In 1841 Joseph Bonaparte, now in England, had a partial stroke.

Joseph Bonaparte returned to Europe again around 1844 where he died in Florence, Italy and was buried in the Les Invalides building complex in Paris. M. Louis Mailliard as executor of his estate.

Caroline Charlotte Bonaparte Benton, Joseph Bonaparte's daughter, died in comparative poverty on Christmas Day, December 25, 1890 in Richfield Spring, NY. A small monument in Oxbow is all that shows where she is buried. She moved to Oxbow in July of 1939 after marrying Zebulon Howell Benton, son of a local physician, and the family was considered wealthy by local standards. When they got married it was at that time the most elaborate marriage ever in the area. But after the fall of Caroline's cousin, Napoleon III, her pension stopped and she had to give French and music lessons to students in Watertown, Utica, and then Richfield Springs; where she died. The great, great grandson and closest

living relative of Joseph Bonaparte and

Retrieved from "https://jeffcowiki.miraheze.org/w/index.php?title=Joseph_Bonaparte&oldid=1780"
Cookies help us deliver our services. By using our services, you agree to our use of cookies.